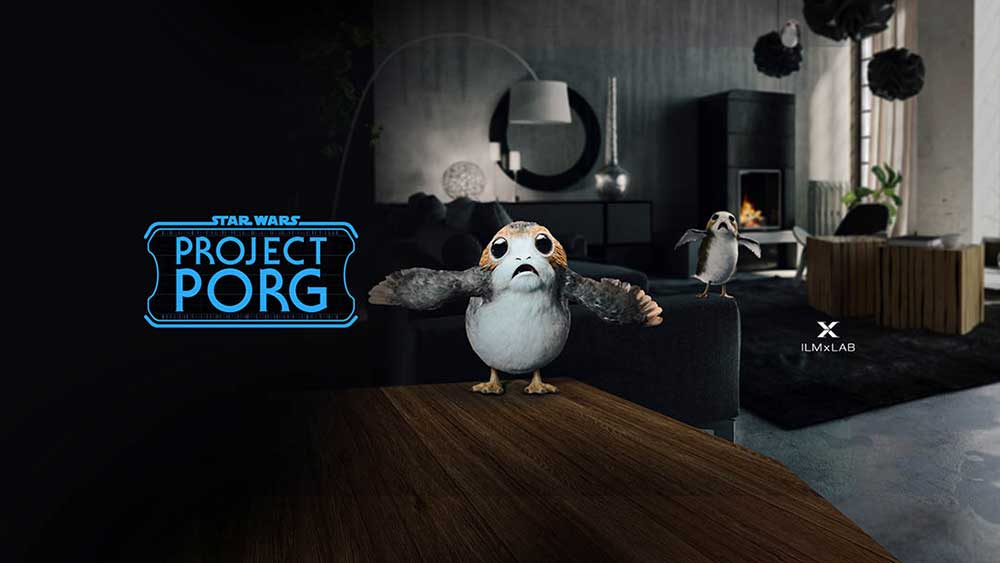 ILMxLAB‘s Project Porg has released a first look at the project, which lets users interact with their own Tamagotchi-like version of a Porg – and its family.

Exclusively released for Magic Leap One (a head-mounted virtual retinal display), Project Porg users will follow their Porg’s life cycle, giving it treats, playing with it (it has its own Chewbacca doll), and nurturing it as it raises its own family.

Yes, there will be baby Porgs in your lounge.

As explained in the video, Project Porg features beloved Star Wars characters Chewbacca and C-3PO, who sends you a message explaining how to take care of your Porg.

“It’s really very much like a relationship that one would have with their dog or cat,” said Matt Martin, creative executive, Lucasfilm Story Group.

ILMxLAB was launched by Lucasfilm in 2015, with a focus on immersive storytelling powered by real-time computer graphics. The team worked closely with Porg animators from The Last Jedi.

“One of the things that we felt was most compelling was this idea of character companions. You actually develop a relationship with a character over time,” explained ILMxLAB executive in charge Vicki Dobbs Beck.

“Project Porg is an aspirational experiment, and it’s important because we can spark people’s imaginations about what’s going to be possible in the world of mixed reality in the future.

“You can take that same character with you to public locations, possibly even a place like a theme park.”

So will Porg owners be able to take their pets to Star Wars: Galaxy’s Edge?

An interesting behind the scenes look at the making of Porg can be found on the official Star Wars website.

In more Star Wars news, Disney is opening a Star Wars land at both Disneyland and Disney World later this year.

The Star Wars: Galaxy’s Edge themed lands coming to Disney theme parks in Florida and California will let visitors pilot the Millennium Falcon, wander through a smuggler’s alley, drink cocktails in a disreputable cantina and interact with aliens and droids.